Breaking from Politico: draft opinion has the court overturning Roe and Casey. We should all pray and pray and pray that this is true. 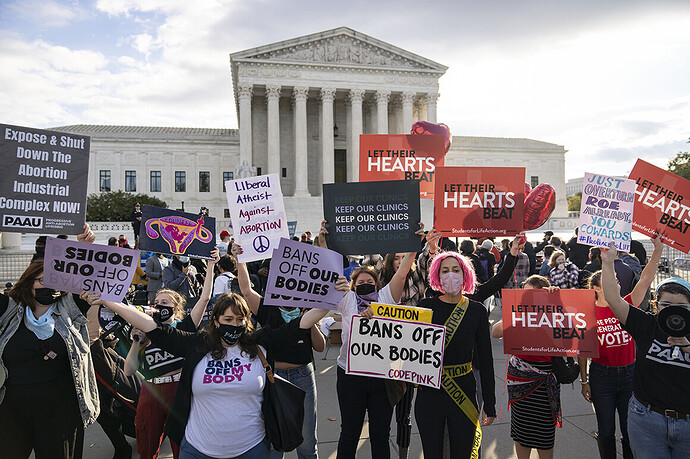 "We hold that Roe and Casey must be overruled," Justice Alito writes in an initial majority draft circulated inside the court.

Thanks, Joe; just tweeted: This will not be any return to the sanctify of unborn life, but it will repeal the largest roadblock to that return, putting the lives of the little ones squarely on the shoulders of our state rulers. May God grant us this first long-prayed-for-and-much-anticipated first step!

Has a draft Supreme Court opinion ever been circulated like this before? I can’t think of a case where it has, but maybe I haven’t been paying attention.

Can’t think of a previous case like this; if you’ve read The Brethren, by Bob Woodward and Scott Armstrong, you get a sense of how opinions are assigned, circulated and refined. I’m sure the leaker hopes to scramble the coalition signing on to this opinion.

I’m sure the leaker hopes to scramble the coalition signing on to this opinion.

I expect that raising the rabble to threaten various aspects of the Court is likely part of it also.

I just caught a thread on Twitter laying out some historical context. Leaks like this aren’t unprecedented, but they are very, very rare. He mentioned The Brethren in a look at restrospective (i.e. post-opinion release) leaks also.

If it did go back to the States, could state law then be overruled by any federal law?

Indiana legislators signed a letter to Governor Holcomb asking to have an emergency session if it is overturned. It is difficult to say what their intentions are - a bill to end abortion authored by Re. Nisly has died in committee for many years.

I plan on talking to our Rep. Lindauer and Sen. Messmer this week about their intentions.

This seems like a pretty clear attempt to scuttle the ruling before it is officially official. The outcry against this draft is amazing to behold if not entirely predictable. May God give courage to the justices who are in favor of overturning Roe so that they may stand against the onslaught which they are about to endure.

I agree. Not to be overly morbid, but I fear for their lives as well. We would do well to pray for them to be safe and strong.

In Glenn Greenwald’s piece from today he mentions another possibility about the source of the leak. “Depending on whom you choose to believe, this leak is either the work of a liberal justice or clerk designed to engender political pressure on the justices so that at least one abandons their intention to overrule Roe, or it came from a conservative justice or clerk, designed to make it very difficult for one of the justices in the majority to switch sides.”
I still think it much more likely to be the former rather than the latter but it’s an interesting point to consider.

Yes, do pray for their lives. The assassination talk is brazen in some places.

Roe was leaked as well.

I am hopefully that this document really does foreshadow the overturning of Roe v Wade. The implications for other fabricated rights is enormous ("Roe and Casey have led to the distortion of many important but unrelated legal doctrines, and that effect provides further support for overruling those decisions.) Progressives should be worried about the potential overturn of the more recent decisions regarding the “right” to gay marriage, trans identity, etc.

But my optimism is tempered by several things, only one of which I’ll mention here. Allowing the states to vote on what constitutes murder is absurd. As we have tried to point out the absurdity of Revoice’s position on sexuality by replacing “same-sex” with “pedophile” or “zoophile”, what if we use the same rhetorical device on murder by abortion? Replace “fetus” with [insert ethnic minority of choice] and the ridiculousness of having some states calling abortion murder and others enshrining it as simply akin to an appendectomy is immediately apparent. The Union will not long last with such a severe fissure (what we now know about pre-born babies has shifted the argument such that the pre-Roe situation where some states had abortion law and some didn’t wont be a good comparison.) Throw in lower courts using the same logic to overturn Roe on cases like Obergefel, and the future looks mighty dicey.

The insanity you’re describing is precisely what the laws about slavery were like before the civil war.

Progressives should be worried about the potential overturn of the more recent decisions regarding the “right” to gay marriage, trans identity, etc.

Throw in lower courts using the same logic to overturn Roe on cases like Obergefel, and the future looks mighty dicey.

Would Justices Gorsuch and Roberts reverse themselves on Bostock even as they stand behind, even partially, the reasoning behind overturning Roe? I doubt it.

The Court claims not to be a political institution, yet they are. The justices follow fashions and public opinion. Most of the public favors a 15 week abortion ban, and most favor gay marriage. The justices won’t touch Obergefell. Even if they wanted to, they would need a case. Who would bring that case? Which governor? Which state legislature?

An error I have made on this discussion is to take progressive defenses of Roe too seriously. They tie it back to landmark civil rights decisions. They say it’s all one big package in order to accuse you of racism for wanting to overturn Roe. Reality is more complicated.

And just as slavery was incompatible with the founding ethos of the USA which then led to war, the cognitive dissonance within our current legal paradigm is prepping us for some sort of potentially horrible outcome.

I don’t expect Gorsuch to reverse himself. But just like Roe began to be consistently challenged by state laws in the 80s, I expect that the trans issue will begin to be challenged in lower courts on similar grounds ; and I think the likely first target will be trans participation in women’s athletics. It wouldn’t take a terribly clever state legislature (provided they collectively have the heart of a lion) to pass laws that will get challenged and lower courts would uphold using the logic expressed in the Dobbs draft. And as Mississippi birthed Dobbs, it might be just the place for the anti-trans legal movement to start.

I do recognize that abortion and sexual libertinism can be and often are perceived differently. The American public seems to use the “is it fair?” test for most moral issues. The fairness test works in our favor against abortion, and against us with regard to laws governing sexual deviancy.

As to the political nature of the court; it’s been that way for a long time, and I think there are few outside the Court that would deny this. Roosevelt threatened to pack the court in the 30s if they didn’t step out of the way of his agenda; and SCOTUS acquiesced. But this shouldn’t be surprising; all men are political animals despite their aspirations otherwise.

But if you’d told me in 2009 that Roe would ever have gotten overturned, I would have been highly skeptical. Even now, I’m optimistic but not certain that this decision will actually be the opinion of the court. This decision could be monumental and far-reaching; the structure is there for it. We’ll see what the country does with it. For all we know, the last 49 years of indoctrination will ignite a movement to enshrine the right to an abortion as a Constitutional amendment. I hope that won’t happen.

I’ll add one more thing: liberals recognize that overturning Roe on the grounds presented in this draft make all of their recent landmark victories (Lawrence, Obergefell, Bostock) wobbly from a constitutional perspective; that’s why they’re freaking out across the spectrum. Whether the current SCOTUS make-up addresses this (legal cognitive dissonance remember) - unlikely. Ben is correct that Gorsuch is unlikely to reverse himself. But the legal precedence is potentially a foundation for future courts to address the LOB abominations. And, yes, if SCOTUS were to overturn them, there’s nothing to say the states wouldn’t protect the LOB outcomes through the legislative process. But I do not think all states will do that.

They say it’s all one big package in order to accuse you of racism for wanting to overturn Roe.

Any talk of states’ rights even tangentially = “you want to bring back the Confederacy.”