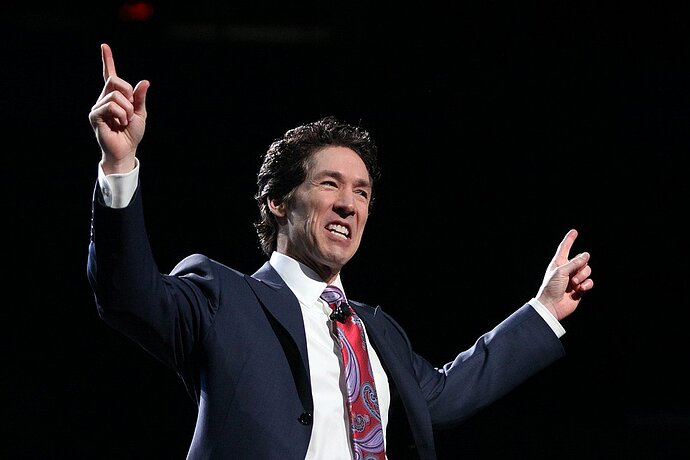 One of the most popular episodes we ever did of this show was about Joel Osteen ... why is that? Why are people fascinated by that guy?

The thought just occurred to me, so maybe it’s wrong, but: he’s just Jordon Peterson for the common man. Ring true?

I mean to be fair to Jordan Peterson, whatever his flaws he has a lot of practical advice that’s actually good. I’m not sure I’d say the same about Osteen…

Of course, Joel Osteen is gauche to the sort of man who is on Sanityville while Peterson is a clear and present danger. We get so excited over men who speak truth denuded of Truth.

And no, Peterson and Osteen are not alike except their popularity. One of them is a man while the other is something else I can’t quite name.

This episode could have been titled, “Why was the Joel Osteen episode popular?”

It has very little to do with Joel Osteen, and so I would personally retitle it. But maybe it will bring in more listeners. I dunno.

Obviously Osteen scratches itching ears. Must be a lot of folks whose Christianity is really just a feel-good way of dealing with death while still caring ultimately about this present world. Also, therapeutic Christianity.

Osteen does appeal, there is no question, to “felt needs”. 'Twas ever thus. In a British context, though, he would be laughed out of court.

You mean British people wouldn’t fall for him?

No, because of a general underlying cynicism in the culture about religion - not just Christian faith either. That said, there is audience within the UK for the “faith” message and prosperity doctrine; but from what I can see, it is very much concentrated in the churches serving people of African heritage, and perhaps Afro-Caribbean heritage.

And yet the UK and all of Europe went whole hog for Hybels, and even wholer hog for Tim K. Juergen tells me Tim K’s long been all the rage.

Fair point. Honestly, I had never thought to put Hybels in the same boat as Osteen, and certainly not Tim Keller for that matter. Hybels has since sunk without trace, Tim Keller still gets quoted.