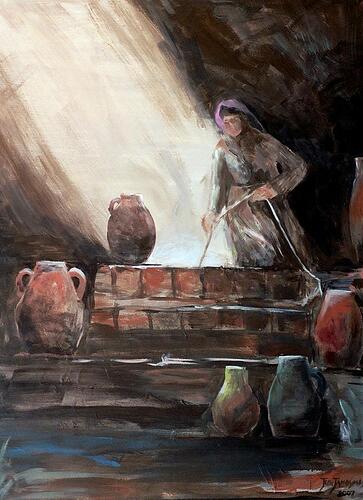 He said to her, “Go, call your husband and come here.” -John 4:16 For quite a while, now, conservative reformed pulpits have been quiet about subjects that, in our political context, are controversial. This is particularly the case with...

Yup, Aaron makes excellent points about the denial of woman’s moral agency. For decades I’ve been trying to get us to recognize this patronization which is so demeaning to woman. Search Baylyblog.com for the posts containing the phrase “moral agency.” Love,

Here is the Wayback Machine archived link to the “Religion-less Spirituality” article by Tim Keller. It looks to be the whole article, which was published originally in Christianity Today in 1999.

The problem with Tim Keller’s take on self-righteousness and the Elder Brother in the parable of the prodigal, is that in dealing with moderns and post-moderns - this isn’t the issue. It’s their active rebellion which is.

To explain. Years ago I preached on this parable, but concentrated on the story of the Elder Brother, which for various reasons I found a lot more interesting to look at than the younger brother. If we were in a culture which was that moralistic and Pharisaical, then yes, preaching on the Elder Brother could gain traction. But we aren’t, and haven’t been in a long time.

The Paradox of Justification is that while the Law shows us that we need a Saviour, we are not saved by keeping that Law; but rather, through what Christ did for us on the Cross. The Paradox of Sanctification is that while the Law shows us how to live, we are not made holy through trying to keep the Law (that is the point of Romans 7). Rather, we are made holy and able to keep the Law as we co-operate with the work of the Spirit in us - as CS Lewis put it, “God will not love us because we are good, but He will make us good because he loves us”. If I have understood it properly, Keller’s approach seems to completely deny the role of Law, either in salvation or in sanctification.

The problem with Tim Keller’s take on self-righteousness and the Elder Brother in the parable of the prodigal, is that in dealing with moderns and post-moderns - this isn’t the issue. It’s their active rebellion which is.

It’s like in that one Veritas Forum discussion (I think that was the event) where Keller is interacting with an unbelieving host who asks him something about sin and Keller doesn’t want to use the word sin, preferring instead to use the term idolatry. When I saw that I thought to myself, “Why would he take a term that everyone viscerally understands (sin) and introduce a religious word that is way less visceral and clear (idolatry) to his postmodern audience of unbelievers?” But then I guess maybe that is the answer, isn’t it? It’s aesthetics.

He also vaguely discussed “human flourishing” which has started to make me break out in face palms whenever I hear that term used by Christian leaders.