The End of the Manual Transmission

The End of Manual Transmission (msn.com)

Whether or not the predicted extinction of the petrol/diesel engine takes place will have an impact on this.

But British and European cars are still predominantly manual.

But interestingly, those two manufacturers mentioned as likely to be fully eliminating manual transmissions are both European: Mercedes-Benz and Volkswagen.

I like driving a manual, but I haven’t owned one in many years. Other things have a higher priority in my car purchasing decisions. Oh well. I guess I’ll just have to tell my grandkids about “back in the day” when I push-started my car one summer.

Drove my '67 red VW bug for years push-starting it. Push, jump in, put it in second, pop the clutch, and we’re off. It was the first year of the twelve volt system on bugs, and they’d made a mistake in the meshing of the differential and the starter. You could fix it, but it only lasted a couple months, so as I said, years push-starting it. You needed to think tactically about where you parked. You couldn’t be headed uphill.

I’ve driven manuals for years but never had had to push start. I doubt the one I have now could be push started because there’s an annoying safety feature that requires the brake and clutch pedals to be depressed before the car will start.

You needed to think tactically about where you parked. You couldn’t be headed uphill.

If you park uphill, you just pop start with the car in reverse instead of first or second.

I doubt the one I have now could be push started because there’s an annoying safety feature that requires the brake and clutch pedals to be depressed before the car will start.

I expect it will push start just fine. Those safety systems are there to prevent the electrical connection from firing the starter motor. If you drive the engine with the wheels above a couple of hundred rpms, the engine has no choice but to start (provided the key is in the on position and you have air, fuel, spark and compression). Give it a try the next time you park pointing downhill.

We just lost the starter in our manual transmission car and the wife and the boys drove over and push-started my oldest and got him pointed at the auto mechanic’s shop. Saved a tow. Unfortunately we don’t have enough hills around here to be able to count on a downhill for a pop start, not least at our house.

I learned how to drive a stick in a 1957 BMW Isetta. This is basically it: 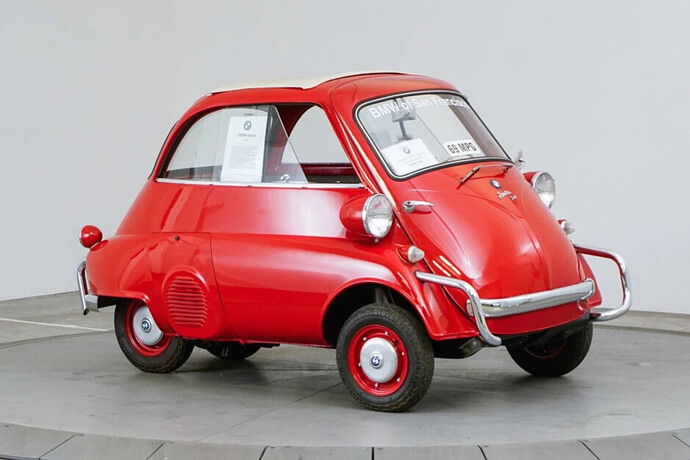 Because it is just a bench seat and the front door opens, the stick shift is moved to the left. They took a standard 4 speed shifter and flipped it upside down. So, instead of 1st being up and to the left, it was down and to the right.

My grandpa got the thing on a trade-in on some furniture. He drove it to the store, hated it, and parked it in the mid 70s. Fast forward to the late 90s and he sold the building. My mom wanted the car so we got a battery and some gas and that thing fired right up and we drove it home.

It still has the original tires - nylon. Goes about 45mph downhill.

You selling? This could be a great way to teach my boys to drive…

Edit: Whoops, looks like market value is typically the price of a small house in the 80s. That’ll be out of my range!

Jump starting in first or reverse is an exercise in violence. Second is best.

Jump starting in first or reverse is an exercise in violence.

That’s true. If you’re going to do it once every couple of years when your battery is dead or your starter motor fails then you’ll just get your fillings shaken. But if you’re doing it every day for years then you might shake your whole car loose after a while.

European here. Manual is done, it’s just too annoying. Drove manual until last year / a few months ago. They said 20 years ago you could drive more economically on manual, but the Audi A2 proved that auto was better. I drove a 3l/100km A2 (78 mpg).

In 2019 on a campsite at Lake Garda, the battery of the family 2009 VW Touran died. I was warned NOT to push start it, that the modern (diesel) transmissions were too delicate to handle it. We did it anyway the morning we drove home, and it worked only in second gear. We drove all the way to Germany that day without turning off the car. At least we tried. I made a mistake in shifting coming down Fernpass in a LOOONG column of cars … and the engine died. Imagine the screams in the car (4 kids and wife)! Fortunately the cars behind us were able to get by since it was a wide road at that point… An tractor technician helped us to awaken the battery by bridging ( do you say that ?) to his car just enough to start the Touran… then made it home.

An tractor technician helped us to awaken the battery by bridging ( do you say that ?) to his car

In American English that’s called a “jump start” in the context of charging a car battery enough to get the car started.

Thanks for posting the article, Ben.

FTA: ‘Humans develop tools that assist in locomotion, such as domesticated horses and carriages and bicycles and cars—and then extend their awareness to those tools. The driver “becomes one” with the machine, as we say.’

When Mazda was designing the Miata, they described the goal as “jinba ittai”, loosely “horse and rider become one.” I have owned two and they are remarkably effective at this. (It was actually my Miata whose starter motor failed last week. I think this is only the second problem I’ve had with this car and the other was just a persistent check engine light from a pressure tester in the gas tank that had gone south but caused no other problems.)

My other cars are both minivans, which are great but hardly much fun to drive. When I was a younger man, even the old Hondas and Toyotas being sold on the used car equivalent of remainder were quite a lot of fun to drive. I would find it a shame if this sensation were to disappear from the earth. My manual transmission days are likely over unless the Lord heals my foot, but I do love to see the sports cars on the road.

A horse and rider communicate through tactile response. Mazda aims to create the same relationship between car and driver.

A few years ago I picked up a Ford Focus with a 1L engine and a manual transmission. It’s quite a bit of fun to drive. It being my first manual I have definitely done my fair share of gear grinding. Gas mileage is great compared with our truck/van.

I’m going to have to find a hill to try push starting.

A few years ago I picked up a Ford Focus with a 1L engine and a manual transmission. It’s quite a bit of fun to drive.

My folks had a pair of mud-aughts Foci with the 2.2L engine and the 5 speed. They were a hoot to drive: they handled like they were on rails and had torque to spare. They got better gas mileage than a Prius on the highway, too. One of them wound up with us for a while and after I sold it I went through the paperwork on it. My father had spent less than $10k for it brand new and it was very trouble-free. Total cost of ownership was ridiculously low.

When my clutch went out on the '67 Bug, for a short time I shifted without a clutch.

That’s a fun skill too. My father once drove us almost an hour home along New England back highways with a bum clutch in a VW Rabbit. I was too small to remember it but it’s the stuff of family legend.

Shifting without a clutch when the clutch broke was kind of fun…except at stoplights, where you had to pop into neutral and coast up to the light, turn off the engine, jam it into first gear and wait for the light to change. Then run the starter with the car in first gear till the car started, accelerate, pop it out of gear, drop the RPMs deftly while applying some gentle pressure to the gearshift to pop into 2nd–all of this as quickly as possible without stalling, to infuriate the waiting cars behind you as little as possible.

I can’t be certain now if I did all this or if I was riding shotgun watching my Dad do it all. My Dad still drives stick shift VWs. Though after his first 1980 VW Jetta turbo diesel we went from a Volkswagen family to a Volkswagen Jetta family. I don’t know what he’s going to do when his twin 1986 Jettas (manual transmission) bite the dust, but I asked him less than a year ago and he still won’t sell one to me!

After my '67 bug, had two diesel rabbits. Drove one with bikes on rack on top, three of us riding, car packed to the gills, and pulling 1,850 pound loaded trailer behind from Michigan to Boulder. If I’d ever touched the brakes the whole conglomeration would immediately have capsized and starting rolling in the ditch. Drove 60-65 in third whole way, and when I got there, calculated we’d averaged 27 miles per gallon. Those were the cars. Drove it from Spokane to Chicago one summer on $23 of diesel fuel, with half a tank when we got to Chicago. Love,