What’s your favorite liturgy and why?

My favorite liturgy (doh!) is what my Archbishop calls “the combo-service” from the 1928 American Book of Common Prayer, to wit: Morning Prayer and Holy Eucharist.

The 1928 American Book of Common Prayer: This is the last thoroughly orthodox Prayer Book in the line of such descended from the English Prayer Book tradition, which had settled on the 1662 Prayer Book of England. After the Revolutionary War concluded, the American Anglicans revised their prayer books in 1789, 1892, 1928, and 1979. The '79 BCP made many and severe theological departures from the orthodoxy of its predecessors, and the one they’re working on now is chock full of perversions (same-sex marriage rite, for example).

The Combo-Service: this follows the classic Western catholic (note the small “c”) organization of the liturgy: Word and Sacrament. The ministry of the Word is the focus of Morning Prayer, including the generous readings from the Old Testament, New Testament, and the Gospels, along with a sermon expounding the lections previously heard by the assembly, and the offering of both set and spontaneous prayers, and a common recitation of an ecumenical creed (usually the Nicene). The Order for Holy Eucharist, of course, focuses on the ministry of the sacrament.

This generally Western catholic liturgy is embedded in the worship of Anglicans, Lutherans, and some congregations among the Reformed, all on the Protestant side of the Reformation, as well as on the Roman side. It’s found as well in the Eastern Church, though elaborated and embellished to the skies in typical Eastern fashion.

I’m curious to know what you intend by the term liturgy. Nowadays its virtually a synonym for “Order of Service.” The more severe sons of the Continental Reformation (e.g. the Anabaptists, some among the Reformed) set out to strip liturgy from Christian worship services, while everyone retained what’s encompassed in the term Order of Service. This latter merely specifies the sequence of whatever elements/events that are supposed to occur within a service of worship.

Here I’m just asking about the composition of a worship service. My church is not presently robust in order of service, but will likely move that direction in the near future.

Here’s an example of a Trinity Reformed Church bulletin from earlier this year: 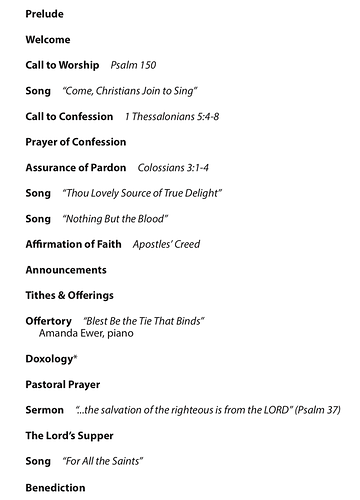 The order of everything is not accidental, of course. I’d be happy to try and answer any questions you might have.

Why is the Doxology where it is, in contrast to the end, for example?

We use the doxology as a transition in the service. Lots of things happen when the congregation sings that very familiar song:

In our service of worship, it basically means, “everything else in the service is done, and the preacher is about to begin.” It has always been there in our order of worship, even long before @jody started leading our worship.

The Order of Service for that Combo-service (our regular Sunday worship) is as follows:

I concur with Lucas, that the order of everything is not accidental. Rather it’s thoroughly logical and deliberate.

It is tied to the offering purposely, I think, because it is an acknowledgment that all we gave was from Him in the first place, and we are simply doing our duty of praise in giving.

Reading of the Word

Preaching of the Word

A strength of this format is it’s simplicity. But the major weakness is how little prayer there is. The readings of Confession and Assurance would usually be accompanied by a short prayer (less than 2 minutes) and the preacher would usually pray briefly before and after his sermon. If I had to re-work it to implement it, I would add a Pastoral Prayer either before or after Song 3. I would also want to work in a regular reading of the Creeds and/or the church’s Confession of Faith.

Protestants have not improved on Cranmers liturgy.

I had a fun thought this morning while fiddling around in preparation for setting out to lead the worship service with the order detailed above:

As to the latter difference, compare the Thirty Nine Articles of Religion with any of the classical Reformed confessions.

We use the doxology as a transition in the service

Maybe better, during the Doxology others things happen as they also happen during each of the service’s songs when people are standing and there can be body movement without disruption. Mothers go back to feed their babies. Latecomers are seated. Musicians go off the platform. Musicians come on the platform. Ushers put up more chairs. Nursery workers come in to get a mother. Fathers take a child out for discipline. Fathers reorganize seating arrangement of their children… Reason for Doxology at that time is that it is part of our offering: “Praise God from Whom all blessings flow.”

Also, there are a several parts of our liturgy done each or every other week which we do not have printed in the bulletin. They are reflexive responses including the prayer before the sermon (May the words of my mouth and the meditations of our hearts…), the prayer at the conclusion of the sermon, the Lord’s Prayer, “thanks be to God” in response to “the Word of the Lord,” “Amen” after prayers and hymns (needs improvement), Agnus Dei, etc.

We proclaim the Lord’s death every other week through the Lord’s Supper and there are parts of that part of the liturgy still not mentioned here.

Finally, for most of our church’s life, our liturgy has included the reading through of a book of the Bible chapter by chapter, week by week. More recently this has been absent, which I am not content about, but there you have it.

The Sarum rite going back to the beginning of the second millenium is also the basis of our wedding services still today, coming down to us through Cranmer.

Our worship liturgy is the same liturgy used by Calvin and John Knox at time of Reformation which, in turn, was the early church liturgy for catechumens—when there was no celebration of the Lord’s Supper. In other words, the Reformation worship was Catholic worship, and those Reformed who have not exchanged it for Jeff Meyers’s oddities remain Catholic in our worship still. As does Fr. Bill. Love,

At my church, we don’t use a strictly followed high liturgy, but we do have a general format we use. This is one from a recent Sunday that is representative of our normal order of worship:

Since it is not a strictly followed order of worship, sometimes 2 of the points will be combined, for example there may be an opening prayer combined with a prayer of confession. Or the Call to Worship and the songs may be more closely tied to preparing the congregation for the sermon. Occasionally there will be fewer songs and shorter prayer so that there can be a brief children’s message before the Offering, or fewer songs to allow for a longer time of prayer.

I appreciate the flexibility because it allows there to be greater emphasis on different parts of the worship on different Sundays when appropriate, with all the parts being there on a regular basis.

Call (including psalm of the week)
Cleansing (confession and response)
Consecration (Word and sermon and congregational prayer)
Collection
Communion (sermon part three, as well as sing while the elements are passed)
Commission and Benediction