This graphic is making the rounds on social media and I was surprised to find many Christians agreeing with it, but no one examining the interpretation and arguing against it. What does sanityville say to this interpretation? 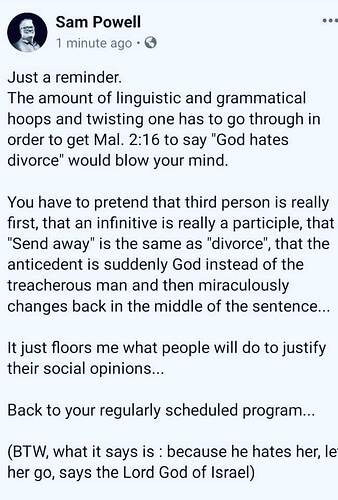 Social media is filled with blind guides who have no idea what they are talking about, and would do well to drop their keyboards and heed James 3:1.

What does sanityville say to this interpretation?

@jander 's comment is apropos to the so-called interpretation. You can easily find jackanapes overflowing with flummery like a broken sewer line.

What caught my attention is not the sewage, but the silence of any who would examine the interpretation and arguing against it. Also, @Mrs.Folks ’ report that many Christians agree with it.

I offer this opinion, based on 40 years of interaction with broadly evangelical Protestants in the United States, many of them pastors or elders . . .

For at least a generation now, evangelical pastors (as a group; there are individual exceptions here and there) have lost their spines. Many of them are outright cowards - fleeing when the wolf arrives. Or worse, welcoming the wolf so that we can evangelize him with our acceptance and love.

The primary pastoral goal for these men is a church community where everyone is helping someone, where help means some good work - mowing grass for grandma, for example. Or shopping for a disabled parish memeber. That sort of thing.

What you never find is preaching and teaching that challenges the sin resident in the flock’s individuals.

Why not? Well, it would drive people away! It would create controversy with the flock! We would need to slash the budget! We’d get a reputation as fundamentalists in the wider community!

You think I’m exaggerating, don’t you? I’m not, as Christ is my witness. I’ve had an entire elders board interrupt a women’s Bible study after three weeks, when one of the women (a feminist) complained to one of the elders that subversive material was being taught! The elders in a meeting ordered the Bible study to cease (they were using materials we’d produced, which did indeed critique secular feminism from the Scriptures).

So, what kind of Christians out in social-media-land will you find? Informed Christians? Christians who are salty with Bible and doctrine and pastoral guidance about the lies the world wallows in?

Is it useful to distinguish, as two separate issues, divorce from remarriage after divorce?

Not really useful in the context of this verse or social media post.

Maybe Mr. Powell should consider the next verse: Mal 2:17, Before he condones the things that God condemns.

I’m sure we all double-checked the contents of Malachi 2 today, but I will paste 14-15 here anyway. How can any Christian dare to approve of a divorce on a technicality after this?

…The LORD was witness between you and the wife of your youth, to whom you have been faithless, though she is your companion and your wife by covenant. Did he not make them one, with a portion of the Spirit in their union? And what was the one God seeking? Godly offspring. So guard yourselves in your spirit, and let none of you be faithless to the wife of your youth.

The problem for the average Christian who doesn’t know Hebrew, of course, is that the deception is hidden behind a supposed scholarly knowledge of how to translate. But don’t be intimidated by that. All of Scripture teaches that God hates divorce. See Genesis 2:18–25; Proverbs 5:15–20; Matthew 19:3–12; Ephesians 5:22–33.

Spent lots of hours on this as it turned out to be quite interesting. Pastor McNeilly’s right, of course, and says all that really needs to be said. But if someone’s interested beyond the essential truth, wondering why this is being talked about and by whom, read on.

First, three of the men who have weighed in on this, rejecting the KJV tradition of translating Malachi 2:16a are men I know personally: Jack Collins and the late David Jones of Covenant Theological Seminary, as well as Gordon Hugenberger, emeritus pastor at Park Street Church and former instructor in Hebrew at Gordon-Conwell Theological Seminary when I was there. All three men are on the revisionist side of Malachi 2:16, although their positions differ slightly from each other. Gordon was at Park Street from 1997 to 2017 and he was the guy who brought women elders to Park Street Church. Jack is on the OT committee of the ESV (I invited him, sad to say) and is the man who posits as a plausible position that Adam could have been the head of a class of early hominids (although he doesn’t say specifically that he holds to that position; he only defends it), and David is the man who called for the repeal of sodomy laws across our nation way back in the nineties. A search on Warhorn and the old Baylyblog (still up and running) will produce a host of further information on these men.

In other words, all the usual suspects line up against the KJV’s translation of Malachi 2:16a (“For the LORD, the God of Israel, saith that he hateth putting away”), but not only the usual suspects. Looking at the way each translation and paraphrase handles the text (and in the case of some translations, such as the ESV, changes over time the way they handle it), it’s clear some still retaining their high view of Scripture think the text doesn’t refer to God hating divorce, but to the husband hating his wife, and thus divorcing her (putting her away).

Good arguments can be made on both sides, and neither side can claim they have no textual problem with their choice. This is what is important: no matter which side one comes down on, it’s not a slam-dunk. It’s a very difficult translational issue and there’s no clear or clean way to do it. That’s why this guy above is lying. He declares the KJV tradition (“I hate divorce” or “he hates divorce”) is unsupportable and the one thing that can be said is that his bombastic statement is unsupportable. Read all the people arguing about this and everyone is in agreement the matter is arguable from both sides, and that’s not even to get to the second half of the verse (what they refer to as Malachi 2:16b).

Further, we know this guy is a destroyer not just because he lies, denying that the KJV translation is a viable scholarly option, but he doesn’t care for the souls reading him when he fails to warn his readers that all of Scripture testifies to the truth of the fact, though, that “God hates divorce.” In our culture, not to say this clearly as you argue about Malachi 2:16a is reprehensible, spiritually. We’re drowning in this sin God hates, both without and within the church, and so any man who loves our Lord and His sheep will never speak of this text without strong warnings attending his discussion of it.

One reason this issue is being brought forward is feminists’ intense desire to defend abused wives from pastors who tell them “God hates divorce,” and then exhorting them to stay in their marriage. The need to defend any such women from such abuse piled on abuse is real and so we should be sympathetic to their instincts on this. The problem is that even if the text was clear saying something approximating He (God) says he hates divorce, it would be an abuse of that text to use it to keep women in the home with a husband violating them, physically. It would be a further abuse of the children watching. On every level it is wrong not to protect women who are subject to ongoing abuse by their husband (and husbands by their wife). We speak of this very clearly both in “Elders Reformed” and in “The Helpful Marriage Book,” and we do so for very good reason. In the home, men beat their wives and women beat their husbands, and the shepherd must protect his vulnerable sheep from these crimes by calling in the civil authority (when they are ongoing and serious).

Nevertheless, to argue the text of Malachi 2:16a as if it must not say “He hates divorce” if we’re going to protect spouses from abuse is ridiculous. Any reasonable lover of God knows the protection of the abused doesn’t depend upon Scripture not having the (true) statement that “God hates divorce” in it. Both are true: God hates divorce and God commands divorce. There is no inconsistency in both those statements being true, which they are.

Could write a lot more about this, but before stopping, here’s a link to an interesting article, "‘For I Hate Divorce,’ says the Lord: Interpreting Malachi 2:16 in relation to prohibition of divorce in some churches in Nigeria,” by Solomon O. Ademiluka of the University of South Africa. If you have some time, read it. It’s not just interesting, but fascinating. I don’t agree with his exegetical conclusions, but the piece struck me as a wonderful bit of pastoral exegesis issuing from a commitment to deep cultural contextualization.

In the end, I’ll stick with the KJV tradition despite the many Godly fathers who go the other way, and who have at least as good a set of arguments as those saying the text properly is translated to the effect that God hates divorce. Love,