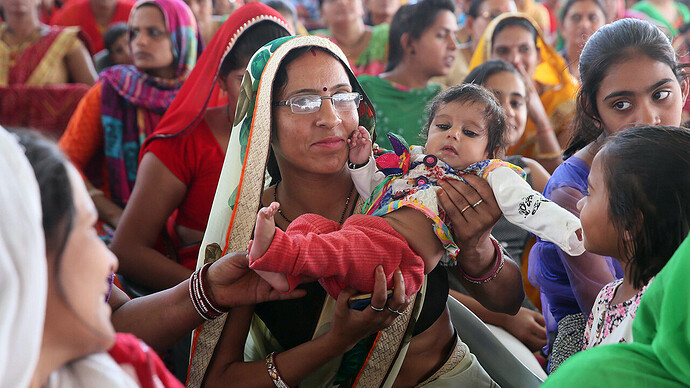 India’s artificially wide ratio of baby boys to baby girls – which arose in the 1970s from the use of prenatal diagnostic technology to facilitate sex-selective abortions – now appears to be narrowing. Son bias has declined sharply among Sikhs, while...

Fascinating stats from the Pew Research Center. Notice the difference between religions:

In the 2001 census, Sikhs had a sex ratio at birth of 130 males per 100 females, far exceeding that year’s national average of 110. By the 2011 census, the Sikh ratio had narrowed to 121 boys per 100 girls. It now hovers around 110, about the same as the ratio of males to females at birth among the country’s Hindu majority (109), according to the latest NFHS.

In recent decades, Christians also have stood out from India’s other religious groups, but in the opposite direction: India’s Christian minority has maintained a sex ratio at birth around the natural level of 105 boys per 100 girls, indicating a relatively low incidence of sex-selective abortion in the Christian community. Indian Muslims also now have a sex ratio at birth (106 boys per 100 girls) that is close to the natural norm seen in India prior to the introduction of prenatal testing.