Everything I’ve seen and read makes it obvious George Floyd and Derek Chauvin were both living at the margins of life. Both committed criminal acts. One did so in the name of the Law. Thus Chauvin’s criminality was more reprehensible than Floyd’s. Do...

On the issue of abortion. This article, from a UK source using American data, puts some numbers on abortion rates by ethnicity. Has the Black church tried to address this?

Abortion of black babies in US disproportionately high - The Christian Institute

Was having a discussion with my boys the other day about the wickedness of mob justice, the importance of identifying it, and of opposing it. How it pollutes true justice, and promotes falsehood. This scene from the end of Wyatt Earp always comes to mind as an object lesson.

I was going to say what is the solution of the woke crowd, but it’s really a lot closer than we think. It’s the Word of God. The question is whether we will risk ridicule for standing for God’s correct version of justice, rather than mob rule. I have to think that there is a direct correlation to the intensity of the mob rule and the weakness of the church. “You are the light of the world…”, “You are the salt of the earth…”, “judgment begins in the household of God” (not Minneapolis). But how many of us are willing to speak out against the murder of the innocent? If we won’t speak out against that, we will have to join the woke crowd to assuage our conscience for not standing for true justice, and so our churches are rendered voiceless, like salt that has lost it’s saltiness.

We really need to sing more psalms. I notice that my pastoral prayer itself becomes a reflection of the songs we sing, and the effeminacy drives me crazy.

May God’s Word and His gospel shines ever brighter in dark days like these.

Andy McCarthy’s comments on the trial were eye opening.

By the way, @tbbayly to this day I still cannot get Melville’s description of Father Mapple’s pulpit out of my mind after you told me about two years ago. Very insightful comment.

The real danger in America today is the totalitarianism of the mob.

Pastor Tim, I’d like to give a qualified pushback on this. If the last 12 months have made anything clear, it’s that the particular mob in question serves the ends of the people who rule this country. The riots lasted until they showed up in the polling as hitting the Democrats. Then they stopped. When a right-wing mob showed up in the Capitol on 1/6, the elites didn’t rest until the perpetrators were in jail with no bail. Mobs are relatively easy to stop for men who have a bit of power and a bit of will.

In my opinion, the real danger in America today isn’t the mob per se, it’s the elites who view the political violence of the mob as a tool to be used for their ends.

In my opinion, the real danger in America today isn’t the mob per se, it’s the elites who view the political violence of the mob as a tool to be used for their ends.

Absolutely, so thanks for improving what I wrote. As I wrote, you might be surprised to know, that’s what I was thinking—that the mob ruling was simply the servant of those intent on rebuilding Sodom and Gomorrah. So maybe mob pawns? Love,

those intent on rebuilding Sodom and Gomorrah

That is a terrifying phrase. Joshua 6.26 comes to mind.

…The last act is the greatest treason. To do the right deed for the wrong reason. (TS Eliot, Murder in the Cathedral).

No doubt I’ve missed something, tho’ based on the 9-minute video evidence, I am not sure what other verdict the jury could have delivered. But yes, the verdict was no doubt influenced by the fear, spoken or not, that Black America would explode if the “wrong” verdict were delivered.

No doubt I’ve missed something, tho’ based on the 9-minute video evidence, I am not sure what other verdict the jury could have delivered.

You missed something. The defense was able to use prosecution witnesses to introduce enormous doubt in my mind as to what even caused Floyd’s death. He had serious heart problems and toxicology showed a tremendous amount of fentanyl and some meth in his system. He had almost certainly consumed or tried to consume several fentanyl and meth pills when the cops arrived, on top of what was likely a dose or doses of fentanyl earlier in the day.

The prosecution also failed to show (IMHO) that Chauvin had violated any departmental policies in what he did.

Do you know that prosecution experts testified that Chauvin’s knee wasn’t even on Floyd’s neck, but rather on his back and shoulder?

Do you know that the crowd around the cops was openly hostile, shouting threats and curses at the officers? And that Chauvin apparently felt threatened enough that he displayed his pepper spray to the crowd twice? That the EMS crew, when it finally arrived felt threatened enough not to provide Floyd with any medical care on the scene, but did a “load and scoot”?

In my mind, the speed with which the jury returned three (mutually-contradictory) guilty verdicts after a case of this length and complexity shows the political influence on the jury.

There is a very good reason why our legal system does not permit trial by 9-minute video in the media or trial by mob. Usually when a man is permitted to arrange his own defense, the other side of the story emerges.

The level of malpractice among our media class in story after story like this is well beyond any kind of mistake or misjudgment. In case after case, the media is found pushing outright lies as truth, stoking racial discord in a racially diverse country. God will judge.

But one way or another, it’s time for people who care about the truth to stop giving the corrupt media any benefit of the doubt in these cases.

Have you watched the video?

No. I think I got the gist.

So let me get this straight. You read or watched the defense’s side of the story, who are paid to try to spin it to not-guilty no matter what actually happened, but you don’t feel it’s necessary to look at the actual video evidence?

This is his neck. Sorry. And it doesn’t get any better when you watch the video. 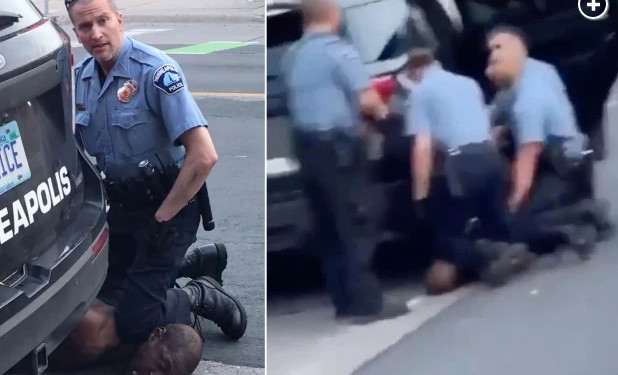 That may not be the cause of death. Maybe it was a drug OD. I don’t know. What I do know is I absolutely would have been “hostile” if I was in the crowd watching this police abuse unfold in front of my eyes.

When I watched the video it became clear to me that I needed to reevaluate my willingness to stand up for the weak and helpless against the powerful. I think that it is incumbent upon anybody who sees something like this to demand that it stop, and I hope that if I ever see such a situation in person that I am willing to risk arrest to stop such brutality.

And that’s true even if Floyd died of an OD.

Where I live the police have Naloxone to save the lives of people who are overdosing. They don’t kneel on their neck and watch them die underneath them.

As my dad said in his sermon on Sunday, there can be TWO morals to this story. George Floyd wasn’t innocent. AND the police brutality was wrong.

I had trouble finding the video. It was helpful to me to see it: 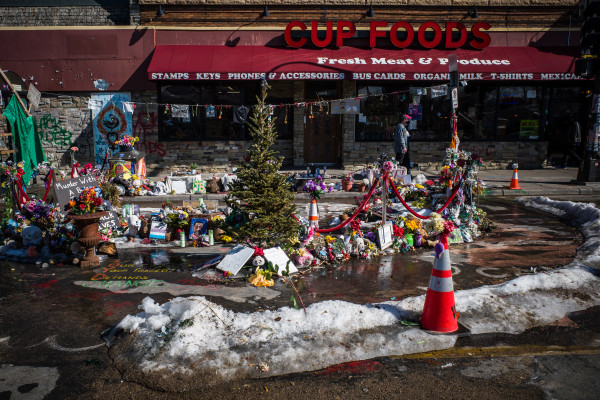 Video: The 9-minute encounter that rocked Minnesota and the world

Nine months ago, a nine-minute encounter rocked Minneapolis and sent shockwaves around the world.

The level of malpractice among our media class in story after story like this is well beyond any kind of mistake or misjudgment. In case after case, the media is found pushing outright lies as truth, stoking racial discord in a racially diverse country. God will judge.

But one way or another, it’s time for people who care about the truth to stop giving the corrupt media any benefit of the doubt in these cases.

No. I think I got the gist.

So what you are saying, John, is shame on all those people who just swallow the media narrative of what happened and allow themselves to be whipped into a frenzy by what they read and don’t go check out the information for themselves. Then immediately you admit to not checking out the most pertinent information for yourself. So where did you get all these opinions above if you didn’t watch the video, but “got the gist.”

My guess: from reading stuff about it and talking to others. Primary sources, dude. You can’t just borrow your talking points from liberal media outlets or conservative ones. Let’s be thoughtful about this and be wise about our own sin and proclivities to sin of those who are reporting.

As my wife said above in quoting Tim from his sermon. There can be two morals. Those who call for Chauvin to be held to account for this are not by necessity saying that Floyd was purely clean and without sin in this situation. Even if drugs were a contributing factor, though, Chauvin should be held to account. The video should make all of us simply cringe. We don’t want police bullies who do what they are doing simply to show their authority and power.

For the record, I agree with what you are saying about the media. They are liars. But that doesn’t mean that we just switch to alternative media and swing the pendulum all the way to the other side and swallow what they feed us. No. We are called to be discerning. That requires wisdom and judgment. Not just in deciding who to listen to, but also in what they are saying.

If you listen to the Andy McCarthy podcasts on the trial and verdict, McCarthy (former federal prosecutor and long time contributor to National Review) tells you that even if there is reasonable doubt that Chauvin’s actions led directly to Floyd’s death, Chauvin could still be in jeopardy due to the standard of criminal negligence–failing to take necessary precautions to preserve Floyd’s life.

I’m very sympathetic to your point of view. I don’t trust the Enemy of the People media. I havent watched the video since trial by video is not justice, and videos often leave out important context. But Chauvin has had his day in court, the verdict has been rendered, and so I defer to the jury. They could have gotten it wrong, but I don’t know enough to say. I agree with you and Tim that pressure from the mob influenced the verdict, which is unfortunate. Yet our system of justice is what it is. Perhaps Chauvin will win on appeal. I have no problem with him pursuing every legal avenue he can to clear his name, as is his right. It’s truly a sad story all around.

I think I’ve been misunderstood on this thread and I’m not willing to budget the time and energy to respond in detail. I’ll just leave it at this: I think a lot of people have heard me say things I didn’t say.

(And this isn’t so much directed at you, Ben, you just happened to be the last in the thread right now.)