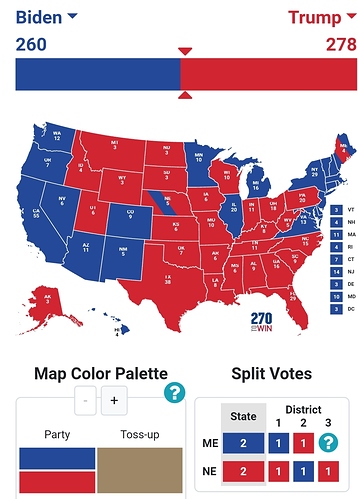 I’m no pollster, reporter or strategist, but thought it would be fun to start a thread on election predictions.

For most of this year, I have felt that President Trump was likely to lose re election. If the economy is bad, or the general state of the country is bad, people tend to blame the president whether the president is to blame or not. It doesn’t make sense, but that’s the way it is.

The media successfully blamed George W. Bush for Hurricane Katrina in 2005, even thought a hurricane is a natural disaster outside of any president’s control. They have tried mightily to do the same with Covid 19, blaming President Trump for what the virus has wrought. Some people may be convinced, in particular older white voters who, in addition to being more at risk for the virus, were also an important part of the Trump base in 2016.

At the same time, many people are tired of the response to the virus. They want their kids to go back to school. They want to get back to work. They want to go to the store without a mask on. They want the old normal back. Due to Big Tech censorship and Enemy-of-the-People media censoriousness, many of these Covid-fatigued people don’t say so out loud. They may lie to pollsters, not just about the virus but also about who they are voting for.

At the last presidential debate, President Trump clearly presented himself as the candidate of normalcy. After sending confusing, conflicting signals for much of 2020, Trump, beginning with the moment he emerged from Walter Reed hospital after testing positive for Covid, has been consistently making the case for normalcy. As in 2016, President Trump has tried to be the voice for forgotten Americans.

Besides his comments on Covid, President Trump acquitted himself well in the last debate. He wasn’t needlessly rude. He wasn’t a boor. He did far better than his previous performance. His closing act was strong, even if his previous acts were not.

The new outbreak of rioting and looting in Philadelphia will give Trump a needed last minute boost in Pennsylvania as well. That’s my hunch.

It will be very interesting to see how Latinos vote and how they may sway some results in states. If Latinos turn out for Trump in a big way, which some polls have suggested, I hope they can carry him to a popular vote victory, just as they did for Bush 43 in 2004.

Feel free to rip me to shreds, especially since my opinion means no more than anyone else’s. But my gut tells me President Trump isn’t a goner, and he has a real chance to pull off another upset.

How are you making the maps? It doesn’t seem mathematically possible for Trump to win this year, to me. But these do show that there is a viable path if he can do unexpectedly well in all of the swing states. 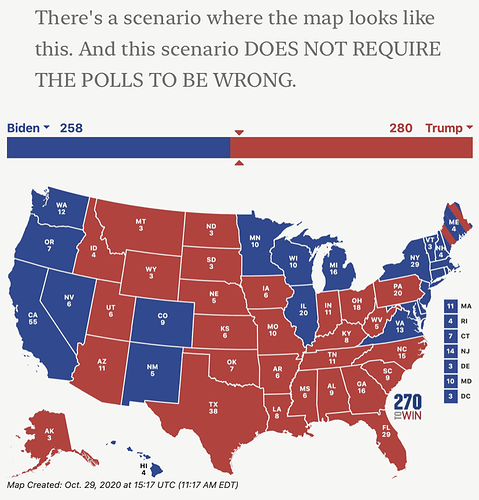 I don’t know how they are making the maps, but I saw this retweeted by Jonah Goldberg.

The polls predicting a Biden victory tend to be overstated. If they showed a slight edge for Biden, they would be believable. Double digits? A presidential election hasn’t been decided by double digits since 1984. In the age of polarization, the likelihood of such a lopsided result is small, yet multiple polls all year have showed Biden winning by Reagan-Carter or Reagan-Mondale proportions. It does not pass the smell test. Joe Biden may be good, but is he another Reagan? Is Trump as despised as Jimmy Carter was, even among his own party?

Combine that with many polls showing Biden winning big overall also have President Trump getting historic numbers with Latinos. Again, it just does not add up.

How are you making the maps?

Create your own forecast for the 2020 presidential election 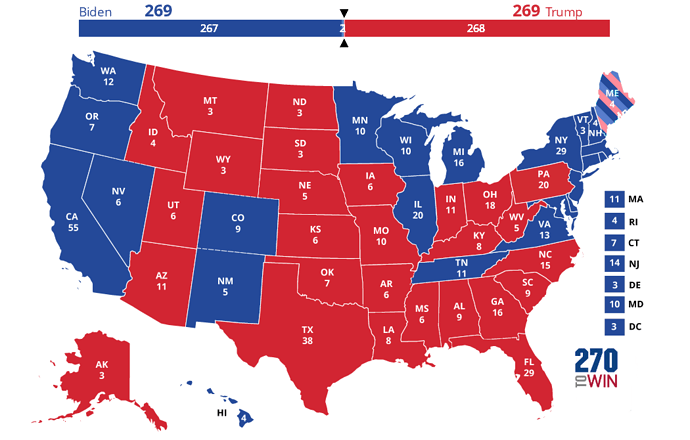 I think Biden will win. Just a gut feeling. No idea what states are leaning which way, so I won’t bother to try to make a map. 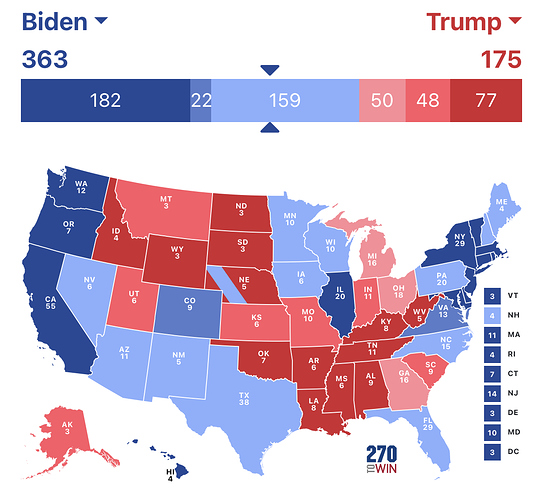 I predict a Biden win with a fairly large margin for these reasons:

Don’t think either will win by more than 5%, but no idea who.

I’m almost always wrong. The only time I was right was Obama re-election. I thought it was pointless for the GOP to run a candidate that year.

That said, I think Trump will win by a narrow margin, once again losing the popular vote.

(Who wants to pick by popular vote? Do we want California to choose every president? But I digress.)

I thought it was pointless for the GOP to run a candidate that year.

(Joe Biden is the Mitt Romney of 2020: This was a winnable election, but the Democrats went with their most Trump-like candidate on everything people don’t like about Trump.)

What particular characteristics do you find them most similar? With Romney/Obama, I can see the connection of arrogance and being out of touch with the working class. Biden’s Twitter, on the other hand, isn’t terrible.

Between 2008 and 2012 I quit looking for things to make sense. What had Obama done before he got elected? Gave a speech in 2004? I thought my momma could beat Obama. He had a bunch of celebrities singing “Yes We Can” He had “hope,” “change,” and some vague plan for universal health-care. He said stupid things constantly. If only we would air our car tires up a little more, we wouldn’t need to import any gasoline. I thought being black would help more than hinder, but he was up against a popular centrist career senator who sealed the conservative base with his VP pick.

Obama had a big victory though. Sure there was “a tea party tidal wave” in 2010, led by Rand Paul. But not as many people are motivated to vote in the mid-terms. After what happened in 2008, I didn’t think a conventional candidate could beat Obama. I don’t think a conventional conservative candidate will ever win again. But I hope I’m wrong - and not because I especially want a conventional conservative, but because I think its a sad time when Americans only want a socialist president.

What particular characteristics do you find them most similar?

Both Trump and Biden shoot their mouths off. They have very different styles but are similar in that respect. Neither candidate keeps his hands to himself around females. Both are (very) old white guys. Both have been accused of foreign influence-peddling involving their children.

With Romney/Obama, I can see the connection of arrogance and being out of touch with the working class.

That’s a similarity for sure, but IMHO the biggest similarity that was hurtful to Romney was Obamacare/Romneycare. The GOP wave in 2010 was largely due to opposition to Obamacare. -Massachusetts- sent a Republican to the Senate to try to stop it. And the GOP basically took Obamacare off the table as an issue in 2012 by nominating Romney. Maybe it wouldn’t have made a difference. But maybe it would’ve.

Plural of “axis”, as in, measure them on the x axis and the y axis and they’ll come out the same.

After what happened in 2008, I didn’t think a conventional candidate could beat Obama.

Interesting observation. McCain ran a truly awful campaign in 2008. I thought Obama was beatable in 2012, likewise Trump, but incumbency bias is real, and you need an exceptionally good candidate to do it. Romney wasn’t exceptional and neither is Biden.

We were promised nuclear holocaust and Literally Orange Hitler before Trump got elected. But like with Obama, mostly the US has shuffled along. If you follow things closely, there are things both men did that people can like/not like, but we certainly didn’t get socialism from Obama or Naziism from Trump. So? Vote for the incumbent. He seems OK.

What had Obama done before he got elected?

This has become very clear to me with the popularity of leaders during the Covid crisis. Trump did OK, while Cuomo was sending trainloads of old people off cliffs to their deaths. But Cuomo plays a competent governor on TV, whereas Trump plays Trump on TV, so New Yorkers say Cuomo did great and Trump was terrible.

Romney wasn’t exceptional and neither is Biden.

This is the thing that gave me hope months ago. But seeing the early voting numbers I’ve moved on.

This is the thing that gave me hope months ago. But seeing the early voting numbers I’ve moved on.

Biden ahead by double-digits? If that’s ever been true, it hasn’t been true in 2 months.

I don’t actually know much of what’s going on except that the turnout is already huge. That’s not indicative to me of an unexciting candidate on either side. If one of them is unexciting, then the unexcitingness has been overcome be something else (which isn’t surprising in this climate). That’s all I meant.

That’s not indicative to me of an unexciting candidate on either side.

Interesting observation. In my decidedly amateur opinion, the early voting numbers look very good for Trump overall. As with most things election-related, time will tell.

I agree. Romney was the worst possible candidate for the conditions at that time – the nation was crawling out of a terrible recession in which the big dogs were bailed out but the little guy was left dangling, and the Republicans offered the voters the sort of businessman who bought out your company, looted it with impunity, and then fired you.

Between 2008 and 2012 I quit looking for things to make sense. What had Obama done before he got elected? Gave a speech in 2004? I thought my momma could beat Obama. He had a bunch of celebrities singing “Yes We Can” He had “hope,” “change,” and some vague plan for universal health-care.

I think you misunderstand the conditions in 2008. It had become apparent by then that the wars in Iraq and Afghanistan were disastrous failures. Also, it had become apparent that the economy had not been working well for the regular guy since 2000, despite the headline figures. People wanted change, and Obama offered it. The only way for the Republicans to have had a chance to win in 2008 would have been to repudiate the Bush years.

Obama had a big victory though. Sure there was “a tea party tidal wave” in 2010, led by Rand Paul. After what happened in 2008, I didn’t think a conventional candidate could beat Obama.

What I found most surprising about the Obama administration was the remarkable level of continuity with the Bush administration in terms of neo-conservative foreign policy and neo-liberal economic policy. The banks crashed the economy, and Obama lost his chance to become a second FDR when he bailed them out (but not the little guy) and didn’t even try to investigate and prosecute criminal activity by the big players (contrast that to the first Bush administration in the earlier S&L crisis). And Obamacare was another handout to the big players in the health care industry. People were hopping mad, thus 2010.

Yes, conventional conservatism is dead because it is nothing more than crony capitalism. And if that is all that is on offer, Americans will choose socialism.