Dr Seuss and the Cuisinart in the Shark's Maw

Dr Seuss and the Cuisinart in the Shark's Maw - Warhorn Media

Are you tempted to capitulate to the woke mob? Maybe more than you think you are. Our heroes consider the sad cancellation of six books by Dr Seuss, and how it reflects the way we all attempt to make peace with the devouring monsters in our lives....

I don’t think you brothers have fully thought through the simple statement that these pictures are bad for kids to stumble upon.

Is Jake going to get rid of his copy of if I ran the zoo? If not, why not? I wouldn’t if we had a copy. And I’ve got black sons.

I just don’t think it’s bad. I don’t think these two images are much different from each other: 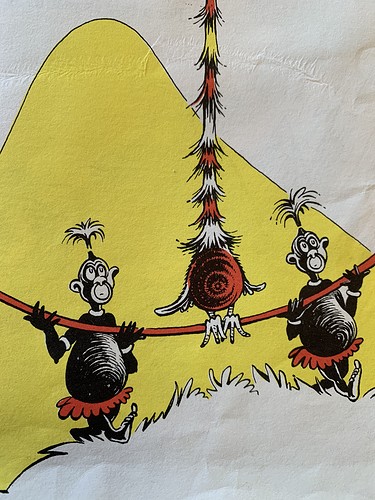 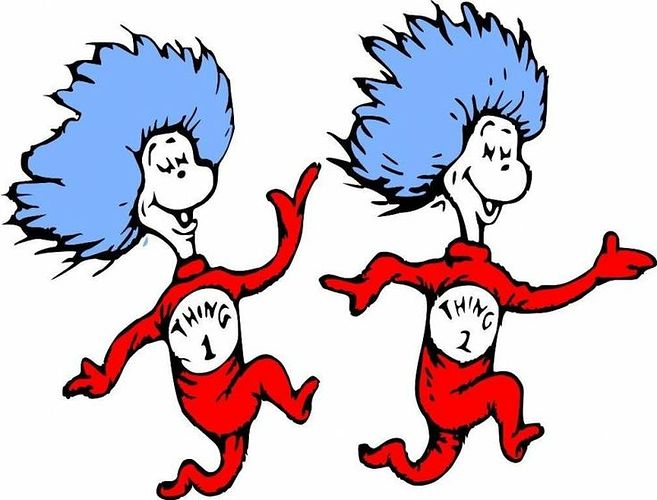 The fact that all Seuss characters kinda look like that does muddy the waters.

That said, I do remember, as a kid, stumbling across vintage art of ape-like black people, and being pretty confused and weirded out by it. At first, I didn’t even realize that the artist was trying to depict a man. I thought it was some weird black creature with big human lips. I wouldn’t say that it traumatized me or transformed me into a racist or anything like that. But that idea that in a perfect world, completely apart from wicked woke ideology, those sorts of legacies might be worth organizations reckoning with, one way or another, doesn’t bother me.

Sure. There are worse ones. The cannibals in Babar come to mind: 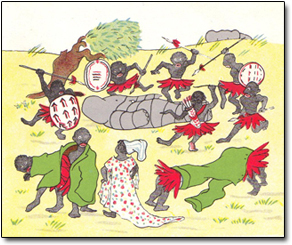 But we read that to our kids, too. I guess it just doesn’t scare me that these are going to harm them somehow. There’s a lot of crazy wrong stuff in what we read going back through history. I think the asexual stuff that my kids see all the time today is a lot more dangerous for them.

It doesn’t scare me either. I wouldn’t have a problem with my kids reading any of those Dr Seuss books. Or Babar. Or any number of other much dicier things.

But if I were CEO, could you induce me to take some sort of ameliorating action on it? Sure.

I’m not thankful for the nanny state. But as an ex-smoker, I can say that all the ads and propaganda about the dangers of smoking were probably the number one factor in me quitting. I’m all for the freedom for people to responsibly consume tobacco. But I’m also all for a society that is upfront (maybe even aggressively upfront?) about the dangers therein.

I’m glad Dumbo is on Disney Plus. The warning label they slap on there because of the Jim Crows strikes me as pretty silly, and a capitulation to the woke mob. But, leaving wokeness aside, if I were running Disney, could you induce me to take some sort of action like that to try to handle the company’s legacy responsibly? Yes.

If someone in my boardroom argued, “let’s just put the content out there, and trust parents, pastors, and other teachers to interpret it”, I’d be sympathetic to that. But I’m not such a libertarian as to think that’s the only possible wise move.

I know how this comment will sound, but I just can’t take people’s outrage about racial depictions in old books seriously. It is Pharisaical guilt transfer and manipulation. We are blowing trumpets about our tithing of racial dill and cumin, all the while we ignore the weightier matters of the law. To preen about Dr Seuss books while doing nothing about the publishing of pornography and obscenity, or worse, making a principle of defending obscenity while calling children’s picture books obscene. It’s all very perverse. If you’re worried about the corruption of children, friend, wake up and have a look at your TV and the Internet.

Just because we permit one bad thing doesn’t mean we should permit or defend other bad things that may not be as bad. Ok. So my “argument” or feeling is fallacious. Granted. It is fallacious. It is emotional. It is illogical. I’ll own it.

I just want to blow the whole thing off with extreme prejudice. If I had some responsibility for it and money was on the line, I might feel differently.

The woke mob really isn’t really a mob. It’s a gaggle of narcissistic twits with nothing better to do. Their vituperations don’t fight injustice but merely affirm and protect the interests and prejudices of the upper class, which is another way of saying the educated and credentialed class over and against the non degreed working class. The Okies from Muskogee.

Our children’s homeschool history curriculum includes a book about Commodore Perry’s expedition to force Japan to open up to trade. The book shows pictures of American sailors that were created by Japanese artists, mass-produced, and sold to a curious Japanese public. I was amused to see the Americans illustrated with unusually large noses and unusually hairy faces. Clearly, the artists exaggerated those features of mid-19th century men of European descent that were most different from Japanese faces. The lesson is that caricaturing the other is a universal human trait.

Of course, a trait does not become morally valid in all circumstances merely because it is universal. The problem with Cancel Culture is not that it points out racist caricatures but instead that it demands bondage to the elementary principles of the world (Col. 2:20-23). The Cancelers demand that everything that touches on their concerns be seen only as black and white, and they have no tools except prohibition for dealing with real or apparent sinful associations. Perhaps worst of all, the Cancelers lack the humility and self-awareness to see that they engage in widespread vicious caricaturing of groups they disfavor, like Trump voters.

MIT has a website showing several of the Japanese artists’ impression of the American Sailors / Commodore Perry. The comment on “the startling blue eyeballs” was especially amusing: “In feudal Japan, Westerners were sometimes referred to as ‘blue-eyed barbarians,’ and it is possible that some artists were a bit confused about where such blueness resided.”

I think that’s just it. It is an unwise and strategically poor decision. One that communicates moral cowardice. Maybe you do it anyway, but you regret being put it that position.

But I’m not such a libertarian as to think that’s the only possible wise move.

I think there’s a hinge that turns right here. None of us would publish pornography or heresy.

But the nut of the problem, and what should make us all uncomfortable, is adopting the world’s standards for right and wrong. Do these images violate God’s law? That’s what matters. Even granting arguendo that they make people “feel bad” (which I actually doubt, generally), is making people feel bad a Biblical standard? Is it possible to write a book without making someone, somewhere feel bad?

Dr. Seuss is dead and still gets more done than any of 10,000 living men. We should judge our elders very, very slowly. Especially when we permit horrors such as what Ben recounts.

We should judge our elders very, very slowly

Since the sins of each age differ somewhat one from another in emphasis and perceived excusability, one age will always find something to condemn in a prior age. What astounds me about the Woke, however, is how little sense they exhibit that a future generation may find fault with the actions and opinions most dear to them. This lack of humility is what makes it impossible to reason with them and come to any political compromise.