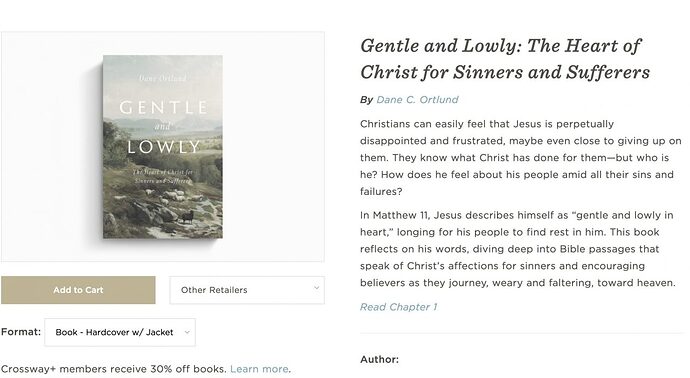 Take a look at this ad from Crossway for their new book by Pastor Dane Ortlund. Like a gurgling brook, it soothes us. Like a white noise machine, it calms us. Like an infant at his mother’s breast, we are quieted and satisfied. So meek and humble. So...

Got this book a while back and started through it with my wife. I thought it would help me grow in areas where I’m weak (comfort and tenderness). But as we read each chapter a conflict arose inside of me. Either I’m way off in my understanding of God’s character, love, grace, mercy, etc., or this book is. About half way through I couldn’t take it anymore and we haven’t returned to it.

There were some helpful things in the book but it was tough work straining it out of all of the cheap grace that doesn’t heal our wounds. I wouldn’t recommend this book to those that it’s supposed to help. I’d warn against it instead. Thanks for showing me that I wasn’t alone in my assessment. 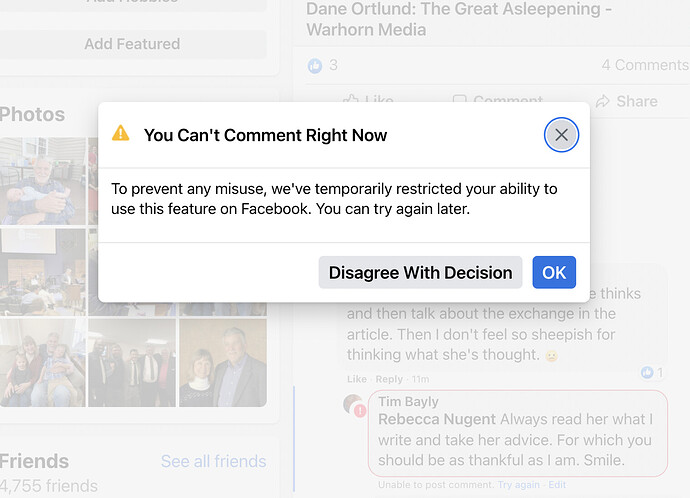 We should recognize how ubiquitous this book is across the Reformed world right now. I’m sure that’s why Tim was compelled to comment on it so strongly. It is and will be having an impact and shepherds should be mindful of it.

Not only has it been a runaway best-seller for Crossway, but in early 2021, a wealthy donor gave Crossway the funds to have churches signup to receive up to 208 free copies of the book PROVIDED they promised to use the book as a congregation in some form. I have no idea how many churches availed themselves of that offer but that’s how I ended up with a free copy. I haven’t read it and haven’t wanted to because it felt like a Christological version of this empathic, therapeutic Christianity that is being promoted at the upper levels of the evangelical establishment these days. Many tell me it is good and helpful but I have remained skeptical, although I have struggled to articulate my skepticism.

According to Reformed Baptist pastor Jeremy Walker (who I know and trust), Ortlund is not all wrong in his book but does bring several cases of unfortunate twisting to the old Puritan sources he is drawing from. As Tim has already said elsewhere, its probably best to let Richard Sibbes, Thomas Goodwin, and John Bunyan speak for themselves rather than getting Ortlund’s summary of Bunyan, Goodwin, and Sibbes.

The devotional classics The Bruised Reed (Richard Sibbes, 1630), The Heart of Christ in Heaven for Sinners on Earth (Thomas Goodwin, 1651) , Come and Welcome to Jesus Christ (John Bunyan, 1681), and All Loves Excelling: The Saint’s Knowledge of Christ’s Love (John Bunyan, 1692) have stood the test of time and been made available by Banner of Truth for future generations to easily track down and read (I noticed in posting the links that a couple of them are currently out of print but I would expect that to be short-lived with these Puritan Paperback titles—hopefully the Ortlund book has caused some to seek out the original sources).

Jeremy Walker says in his review:

Lost sinners need to be confident that a saving Christ will receive them with infinite readiness and tenderness. Christians need to know Christ’s disposition of love toward us, and to feel it, and to understand the ways in which it is manifested toward us. Because of my delight in the topic, I wanted to love this book, and at points I did. Nevertheless, I too often felt I needed subtly, internally, to rework a phrase, to introduce a nuance, to press further a point, or to adjust an assertion. […] I think there is a danger that it might not so much correct certain imbalances as introduce different ones.

If that’s what a seasoned pastor believes is necessary while reading Ortlund than what of the flock who may not see the subtle twists or imbalances that are being introduced? All the more reason to steer clear.

You have raised a good warning for us, Tim, and I thank you for doing so.

We should recognize how ubiquitous this book is across the Reformed world right now.

There’s often a certain faddishness to books. This devotional or that Advent book or such an such a theology treatise. Books come and go. Give it five years and no one will be talking about G&L. But I’ve been genuinely surprised by how many people seem to be falling all over themselves to commend this book. And from authors/pastors/theologians who know the Puritans well. Is any book really worth so much hype and so little critical engagement?

Either I’m way off in my understanding of God’s character, love, grace, mercy, etc., or this book is.

How can Pastor Ortlund be so certain of his prescription for those Reformed Evangelical souls who are his and Crossway’s market niche?

I’ve felt this way about a lot of Crossways ‘big’ books lately. Not that they’re totally untrue, but from my (limited) perspective, they’re not what most Christians I see need. Reformish Christianity is so saturated with justification alone and cheap grace that any discussion of the law of Christ and the need for growing in sanctification is automatically discounted as legalistic.

I agree with Dave, above. Here in ascending order of importance are:

The good: makes you want to read Goodwin, Edwards, Bunyan et al on assurance. Quotes them at length.

The bad and the ugly: his preciousness; his carelessness; his failure to ground Christ’s gentleness biblically; his spoiling of what he gives you from Goodwin and Edwards because of the other bad/ugly stuff. No one needs to hear garbage like:

“[Jesus’] desire to draw near to sinner and sufferers is not only doctrinally true but aesthetically attractive” (101).

Last and most important, the blasphemous:

“And if the actions of Jesus are reflective of who he most deeply is, we cannot avoid the conclusion that it is the very fallenness which he came to undo that is most irresistibly attractive to him” (30).

It’s mind-boggling to me that I couldn’t find a peep online about this sentence, even from those who didn’t like the book. I think it’s the most significant sentence in the book. Yeah, I know he didn’t “mean” to blaspheme. But his preciousness and carelessness—which is to say his lack of reverent fear of God—led him into evil. And no one reading the book ahead of time had sense or fear of God enough to warn him against leaving this sentence in, either. This is a book to warn against.

I’m glad I wasn’t the only one annoyed with this book (and the way it’s being promoted).

I only read it because my SIL was so annoyed with it (they used it church-wide in small groups… probably “free”) that she bought me a copy.

I read a review of this book on Doug’s blog and he recommended it, though he said it did at time suffer from being overly emotive — something he said the puritans could be prone to. I started reading it and right off the bat Ortlund makes all kinds of assertions about Jesus’ highest aim/desires — the kind that Ben mentioned. This kind of speculative talk turned me off. Thanks for the thread.

Which of the Puritan original sources would you all find most helpful if you had to pick one? I’ve heard good things about Sibbes.

Sad that Doug recommended it, bit then it is a Big Eva best seller.

Ben has spoken well about what is most to be condemned in Ortlund’s treacle. Pay heed to him.

What was most noticeable to me right out of the gate was Ortlund’s repetition of the statement Ben quotes, incidentally, that meek and gentle is “who Jesus most deeply is.” Ortlund never stops saying this.

That Doug and everyone else don’t bother to expose this denial of God’s perfections indicates how much they fear departing from Big Eva’s conversation. Our Lord’s perfections are more gentle than just? More lowly than lordly? This kind of false antithesis is rife within Big Eva. Note Ortlund’s allusion to the heart of Jesus vs. the God of the Old Testament.

His errors could not be more obvious.

As far as which Puritan to read on assurance, anything at all would be better than Ortlund. But start with the careful words of our Westminster Standards:

Anything written by a Puritan is going to sound these notes above rather than the cotton candy Ortlund is selling. Love,

Sibbes’ Bruised Reed is an excellent intro to Puritan theology that is accessible at a devotional level. My wife, a godly woman but not someone who geeks out over the Puritans, loves The Bruised Reed. There’s also an audio of part or all of the sermon somewhere. Goodwin’s Heart of Christ is also fantastic. Neither is as twee as Ortlund’s summary of their works nor as truncated as his theology. They offer the comfort of Christ along with brilliant calls to repentance and faith in Christ. And both books cost less than the price of a pint of beer!

A friend sent me this Ray Ortlund tweet and the David Bahnsen response and it felt significant for this thread so I thought I would post it here. 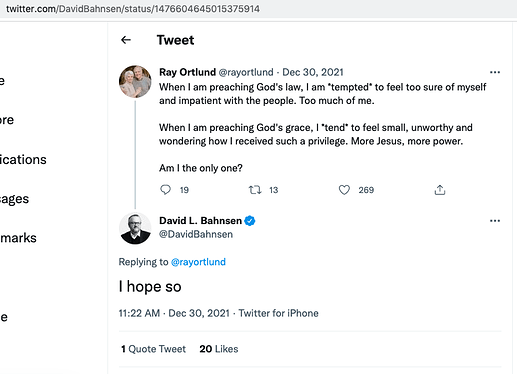 Additionally, while I was scrolling to through Ray Ortlund’s Twitter feed to find the original tweet, I found several other tweets that seemed relevant to the discussion in this thread (some tweets are by Ray, some are retweeted from Dane). They all seemed highly illustrative of the “preciousness and carelessness” @bstormcrow highlighted above. 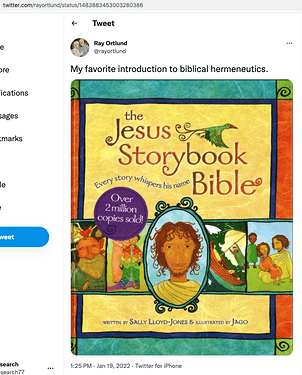 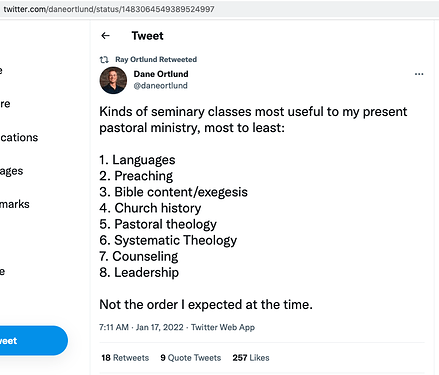 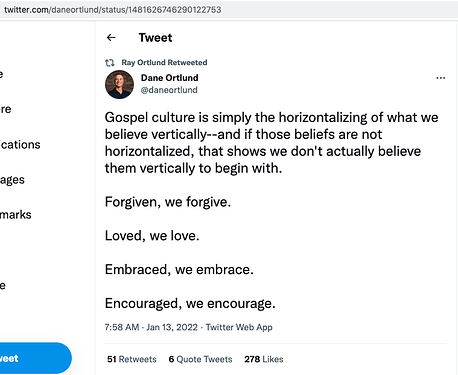 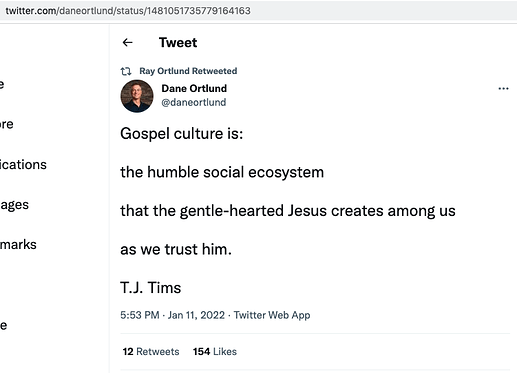