Star Wars: The Rise of Skywalker

Here it is! The completion of the Skywalker saga. Or whatever saga it was that Disney executives thought they were telling. Nathan and Jake will review it for you. Yay again! Support us here! Listen to the episode at a separate link here! Subscribe... 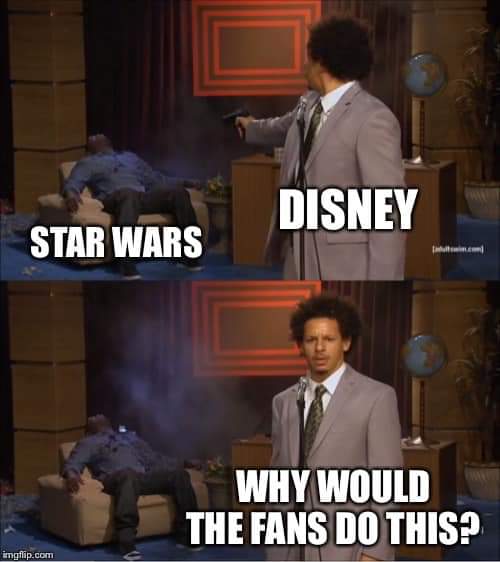 So do I remind him that we have a no memes policy? Hmmm…

Ban him. But don’t dignify him with the rule breaker badge.

I think technically it is a “no gifs” policy, but I didn’t just check, so maybe I’m remembering wrong.

Perhaps we should add/change it to a no memes policy. (And then ban him.)

I say we change the policy to allow for gifs and memes. And then ban him.

It’s got to be time for a random banning anyway. Don’t give him a reason. Just ban him for the heck of it.

That was a good point about the lack of professionalism and ownership in letting JJA throw so much shade at The Last Jedi. I didn’t think about it in those terms while watching because I was so excited to see shade thrown at TLJ.

I’ve heard Rob Long and William Goldman both say variations of the same thing: no one in Hollywood knows why anything works. There’s no guarantee that $$$$ plus all of the talent that money can buy will translate into good storytelling.

In comparing it to the Last Jedi it was better, but definitely full of subtle(and not so subtle) ways to promote agendas in culture. Of course one of those is making the main protagonist a female and having her lead men.

I have so many opinions about TRoS. Opinions that would make it sound like I hated it or loved it or couldn’t care either way depending on what/how it’s being discussed.

With this new trilogy I’ve been sort of watching it with one eye on the movie, one eye on my kids, and a lot of my opinions are biased in that direction. I look at how the movie impacts them and see where I need to jump in. In a way it’s been an interesting ride. My eldest daughter was 11 when TFA was released–15 now–and I’m happy to say I’ve been able to shepherd her to the point where she recognizes all the Grrrrl Powerrr and other agendas without me pointing it out, and the new Star Wars has been a good playground to work some of that out with.

But beyond that, I was looking to see if there was anything good in these stories to capture their imaginations, which in my mind is essential to developing a good ‘leaf-mould of the mind’. And on a pure fun, child-like level, with archtypes and cool costumes and laser sword fights, swashbucklery and thrilling adventure (a boost of nostalgia doesn’t hurt), on that level, I was happy with TFA. And on that level I loathed with a righteous loathing TLJ and all of its nihilistic, plotless, agenda-driven subversiveness. Before I could even voice a word, one of my children’s reactions to TLJ walking out of the theater was “I hate Luke Skywalker now”. On a child-like level, it failed. And worse, it led to mere apathy. For me and for my kids. We could care less about the new characters. There weren’t as many living room lightsaber fights anymore.

So all of that (plus more I’ll not get into here) was the context going into The Rise of Skywalker. For the previous two films we watched opening night. This one we saw in January. The kids were excited, but not clamoring as they were for the previous two.

So we watched it, and it was a mess. But I’m here to say, on the level I described–with an eye towards my kids and their reactions, and with an eye towards the movie seeing how there was an actual overt course correction from TLJ–I think it was a glorious mess. In fact, every fault I find with this film (and yeah, there are many) I can more or less lay it at the feet of the trilogy as a whole.

I found this film to be fun, full of swashbucklery and adventure, and a noble rebuke of the mindset and ideology that created and delighted in TLJ. A film shouldn’t have to be a rebuke of it’s predecessor, and typically that would be a negative, but in this case, because it’s Star Wars, because my kids were watching, because of the weird cultural context we find ourselves and how even stories about space wizards impact us, I believe the rebuke was necessary and fitting.

That said, The Mandalorian beats all the new movies hands down.

That said, The Mandalorian beats all the new movies hands down.

The Mandalorian was enjoyable and was surprised how well done an eight week streaming tv Star Wars done. In eight episodes it gave a compelling story, interesting/complex characters and tied most things together well by episode 8.

There is at least one thing I hope are addressed in the second season, who was the mysterious figure who we know has a cape and spurs we saw at the end of the Chapter 5: The Gunslinger.