Lord of the Rings: The Rings of Power makes me feel crazy!

Lord of the Rings: The Rings of Power makes me feel crazy! - Warhorn Media

No we didn’t watch Lord of the Rings: the Rings of Power. But it makes us feel crazy with all its feminism and stuff! Ugh! Support us here! Subscribe here! Download the episode at a separate link here!

Man…
Guys, Galadriel was a “battle babe” in Tolkien’s extended universe in his unpublished works. This was misfire. You needed an expert on Tolkien’s Middle earth on the show.

It’s cool to not like Tolkien’s universe and only like LOTR and the Hobbit, but my second hand understanding from my Tolkien expert friend who did watch the first two episodes of TRoP is that it’s actually considerably closer to an expression of Tolkien’s original vision than Jackson’s radical reimagining of LOTR. What Jackson did with Arwen was such a departure from the books.

The underlying ideas in this show were fine. The take on The Rings of Power was meh.

I appreciate the pushback, but I have since watched some of the show, and I don’t agree with your friend at all.

Tolkien does talk about Galadriel doing cool stuff such as “fighting fiercely against Fëanor in defense of her mother’s kin.” And she throws down the walls of Dol Golder herself. She is meant to be strong and hugely powerful. One of the biggest threats to any bad guy who has designs against Middle Earth.

But the show’ s cornball depiction of her as an armor-wearing, sword-fighting general-lady (doing flips to kill snow trolls) is ridiculous. Tolkien’s combined works contain nothing of the sort. And it’s not in the spirit of anything he ever did.

Thanks for the reply.

I was judging without having watched myself. Not a good thing to do;)

I know what you mean, and I will cop to rushing to judgement on many things in life. But just the imagery from the trailer (of a woman in armor, doing flips, using a sword, leading battles) was enough for me to write it off.

The signification of these images is that men and women are no different. They are both equally adept and suited to whatever they wish to do. That’s not Tolkien. Tolkien did have a conception of women (especially his queens and elf women) as enormously powerful. But he never erased the distinctions between men and women.

And if someone points to this or that passage in this or that uncompleted work where Tolkien has a woman wield this or that power (or even fight or use a sword), it doesn’t bother me in the slightest. The broad sweep of his work (and most certainly his published work) is toward men as warriors and heroes, and women as something else. That something else can be (and often is) extremely powerful, as I just said. More powerful even than most of the men in the stories. But one thing that it’s not is just a woman acting like a man.

Some will say that Eowyn is the exception, but she’s a complicated, broken character. And though she has real valor, and her author commends her for it, she’s not meant to stay that way. And she doesn’t.

I watched it, and all I can say is that it could have been much worse. Though Galadriel deciding to swim the entire ocean is one of the dumbest decisions ever made in the history of storytelling.

I found this article accurate and insightful. 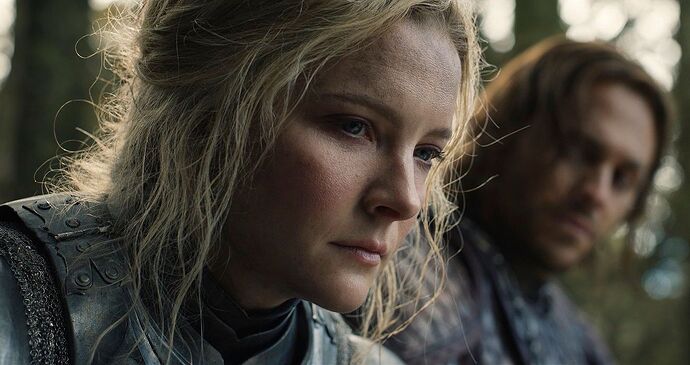 Whatever else Rings of Power may be, it is not Tolkien; nor is it—as the opening credits claim—based on The Lord of the Rings and its appendices in any meaningful way.

I haven’t seen any trailers and know next to nothing about this show, but I can say this: whenever I see “The Rings of Power” I hear Johnny Cash singing it.

You do not want to fall into a burning ring of power imho.

Nathan, I went to a free viewing of the episodes that were released, and I despise the show. I will say some of the Elrond stuff was slightly entertaining, but the whole thing takes away from magic of living in the world of Tolkien. I felt like I was watching that awful Aragon movie or something. Quite honestly, it reminded me a lot of that movie.

You mean Eragon? If RoP is anything like that abomination then I feel fully vindicated in not watching a single episode so far. If people in Hollywood actually wanted to make a useful and good redo, Eragon is a prime starting point.