Just a clip, but some rough stuff here.

Seems to be advocating a Roman Catholic transubstantiation view; a Roman Catholic / Paedocommunionist removal of the preaching of the Word from the center of worship and raising up of the sacrament into its place; and a Brethren / egalitarian take on preaching & leadership. But without wanting to commit to any of it, or at least not yet.

This might seem very odd for somebody like Chan, known more for his emphasis on grace, but I always try to remind people that legalism and antinomianism are flip sides of the same coin. I would argue that Chan has for a long time been essentially antinomian, and though this is not a direct legalist move, I see the seeds of it here.

…“most divided the church has ever been”? Really?

His opening lines about the elements of Communion being the literal body and blood of Christ could be taken as just an overstatement against the Memorialist view, but his disagreement with the Reformers returning the preaching of the Word to the center of the Lord’s Day Worship is the most concerning thing. Biblical worship is always balanced and comprehensive, and when you overemphasive one element of worship (whether that be prayer, singing, or the sacraments) to the detriment of others the natural tendency is always idolatry. God’s written Word to His people should always be where the rest of worship flows from.

Somehow I knew Chan’s name, although I still don’t know who pays him or where, and why he matters. Start with his prestidigitaciousness. I’m not against any use of fingers, hands, arms, and facial expressions in preaching, but I do believe when the medium of the preacher’s body overwhelms the message of the Word (check out :26-35), the things being preached are bad. Chan’s message of the word is overwhelmed by his facial displays, arms, hands, and fluttering fingers. And sure enough, he presents us with two choices: transubstantiation or “just a symbol and nothing more.”

We must recognize that the Reformation was not innovations, but restorations of the practices of the early church. Chan still doesn’t know that and it’s because he’s never read the Reformers themselves. Then to attack the centrality of the Word of God preached in Christian worship by riffing on pastors spending twenty hours alone in their studies preparing the sermon is weak. Very weak.

This is why the federal vision men began bragging among themselves about how short their sermons were becoming. Love,

Then to attack the centrality of the Word of God preached in Christian worship by riffing on pastors spending twenty hours alone in their studies preparing the sermon is weak. Very weak.

I believe Chan went to The Master’s Seminary, and if there’s anything MacArthur teaches the men there, it’s how to spend 20 hours/week in their studies preparing their sermons. I strongly suspect that Chan is responding negatively to his formation in that case.

Somehow I knew Chan’s name, although I still don’t know who pays him or where, and why he matters.

What I see is a man who has grown weary of the knowledge that the leadership he exercises in the Name of God is really a hustle, as he would know best

Chan was very formative for me as a young Christian in high school. Even though it wasn’t long before I outgrew him, I always kept a passing interest in what he was up to.

From my point of view, (which is, admittedly, one who only has observed these things from afar) a summary of “who pays him and where and why he matters” is as follows.

-Chan planted a church in Semi Valley, CA in the early 2000’s. In a very short time, it went from him preaching to six people in his living room to a church of tens of thousands with a multi-million dollar campus. This apparent success story propped up Chan’s ego and hurled him into the Evangelical speaking circuit. This is where I first became familiar with him.

-Over time, Chan’s conscience increasingly bothered him. The consumerist culture of his church (which he created) bothered him the most. He tried to lead the church toward and outward focus and generous giving. It appears he did lead by example in this. He stopped taking a salary from his church, gave away more of his income than he kept, and even moved his family from the suburbs into a rough neighborhood. I assume he was still making bank on book royalties (with sales propped up by the Evangelical Industrial Complex), but I believe he was sincere in his efforts–I don’t think it was an act. When his church outgrew their building, they had plans to build a new, bigger one. But under Chan’s influence they instead built an outdoor amphitheater for their church meetings (since bad weather is not really an issue in SoCal) for a fraction of the cost. But he was not able to achieve the change he wanted in the time frame he wanted, so he ended up leaving his church abruptly.

-He spent some time traveling abroad with his family visiting missionaries and learning from them. He spent a lot of time in China learning from persecuted Christians there (Chan was born in San Francisco, but raised in China for much of his childhood).

-When he came back from his travels, he became an outspoken critic of the consumerism of churches and instead began pushing for a house-church style of church order where pastors are unpaid and the church owns no property. This was memorialized in his book: Letters to the Church where, from what I understand, he argues that his house-church model will address most of the issues facing American Evangelicalism. From what I understand (I haven’t read the book), the book properly identifies a number of problems, but dogmatically asserts naive and simplistic solutions. In addition to the book, he launched an organization called We Are Church based in his birthplace of San Francisco to advance his house-church model.

-Somewhere in here he started speaking in more of the charismatic and hyper-charismatic circles, including Mike Bickle’s International House of Prayer. IHOP interestingly has a huge contingent of charismatic Roman Catholics who Chan met and interacted with on a few occasions. Once during a Q&A session with a group of these Catholics, he was asked the question, “Francis, you’re an evangelist. What message do you have as an evangelist to us who are Catholic?” Chan’s response? “I don’t believe the Holy Spirit wants me to answer that question.” Link

This new direction is really sad to me, but not overly surprising. He’s been on a weird trajectory for a long time.

I don’t know who this guy is, but his tweet perfectly captures how I feel about the Chan video in the OP:

That’s pretty much been Chan’s MO.

Thanks for the history, Zack. Helpful.

This is why the federal vision men began bragging among themselves about how short their sermons were becoming.

And right on cue, the Theopolis dudes: 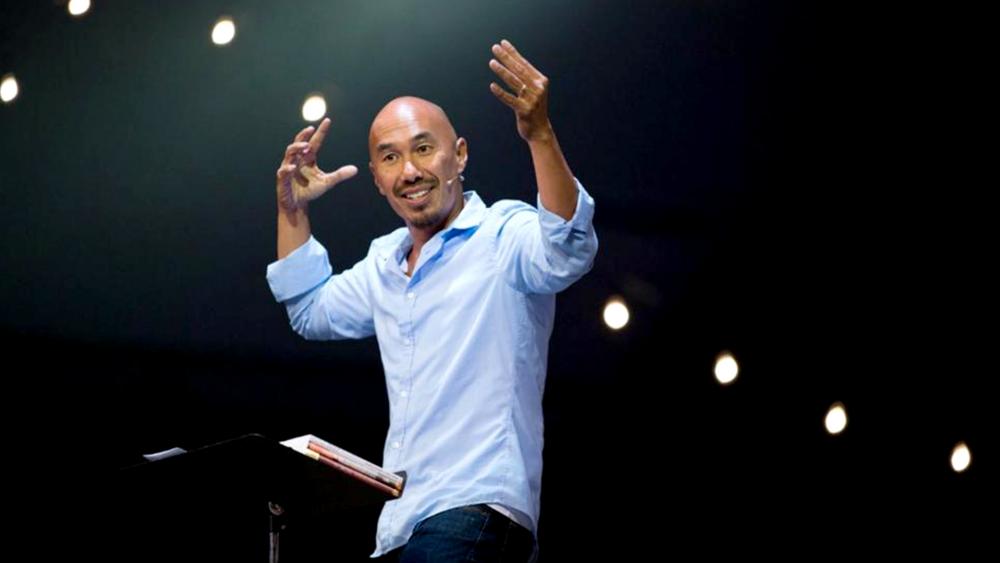 The Eucharist is Making Francis Chan More Reformed, Not Less

When one of the most famous personalities of the “young, restless, reformed” world starts sounding like an emissary from Vatican City, #BigEva social media takes note. That’s what happened this week when a sermon clip surfaced of Francis Chan hinting...

I dunno about the rest of you, but today I learned the word “prestidigitation.”

That’s a good one to know, especially when watching anybody doing public speaking or selling you something.

Tried it once. Couldn’t stand it. Dungeon master was my roommate who grew up playing early versions of it in Gary Gygax’s home with friends and family, Gary himself doing the honors.

Thanks for this background. It is helpful to deal with a man as a flesh-and-blood human and not a caricature.