Pres. Trump has always been unprincipled man. God uses unprincipled men. Reagan/Trump simply God’s tools used by Him to do much good. Jesus said it tho: no man’s good. Not ur dad or pastor. Not Reagan or Trump. Not Hybels or MacArthur. Only God. Donald Trump Turns on His Own Supporters Over Abortion

As we often have to learn, “put not your trust in princes …”

The rules about rich pastors today are never to criticize them as long as they haven’t been caught in notorious sexual sin.

Those rules are unbiblical. Divine inspiration is proven by how scrupulously Bible records its heroes’ worst sins.

Now then, the choice of a Bible version is a matter of trust for decades to come. Knowing Fee/NIV and Grudem/ESV and Carson/NLT, it’s deeply disturbing to contemplate starting down this path once more withh MacArthur/LSB. John is not good with leadership, neutered Scripture, or money.

With these facts in view, should we commit to his LSB? Maybe yes, maybe no, but anyone shouting down the concerns needs to leave the room until they have learned that no man is good and men’s sins and vulnerabilities need to be taken into account before going all-in with their personal Bible product. #Biblestraightup

should we commit to his LSB

The NASB95 and NKJV are already quite good. 1 Cor 6:9 on NKJV could use improvement…

Christians in States today are on jihad in support of BigTech/DeepState/Media’s surrogate war against Russia carried out by Ukraine. $100,000,000,000 & counting. Embarrassing how quickly we bought into another neocon colonizing war. Read it: Media Rewrites Ukraine’s Dark History - by Glenn Greenwald

Problem is sun is setting on NASB. It is being orphaned. Also, it’s goodness if by comparison to a very weak field, as I’ve started laboring to show with the #Biblestraightup series.

So a new translation? The Warhorn Standard Bible? Based on an existing text?

Problem is sun is setting on NASB

Sun is setting meaning that the new 2020 one is fey? Yeah Lockman not looking good…

Already tried w/getting the ESV started and it’s not been a happy time watching it the past twenty years. Further, the number of Warhorn supporters is miniscule and they are mostly poor. We only received half of what we needed when we asked for Warhorn support this past month. Which is to say we have no delusions of grandeur. Still, we love our work!

BTW, as you men might have realized, I’m going to reproduce here the writing I do on social media. There are those here who never see any social media, so now I can let people here know what I’m thinking abt, if you care. Love,

“‘I earned this job. We earned this majority, and — dammit we are going to win it today,’ McCarthy said to a standing ovation…”

BTW, as you men might have realized, I’m going to reproduce here the writing I do on social media. There are those here who never see any social media, so now I can let people here know what I’m thinking abt, if you care. Love,

You know, it’s funny, about a year ago I was talking to a brother back home whom I had not spoken with at length for two or three years. As we were catching up, somewhere in there I conveyed to him that I had appreciated this Tim Bayly guy I had been reading and listening to for a few years.

We happened to talk on the phone again the following week. I guess he had looked you up on Facebook or something and proceeded to tell me how concerned he was about something squirrelly you had written. Of course, I am not on social media, and had no idea what he was talking about.

I guess this thread will help me keep up with all the Tim Bayly controversy I am going to be called to task for!

“Transgender” is a lie. God assigns sex at moment of conception. Either male or female is the office He assigned us. We either obey or rebel against this office. It is never Christian, nor even compassionate, to help someone repudiate their sexual office assigned them by God.

As we were catching up, somewhere in there I conveyed to him that I had appreciated this Tim Bayly guy I had been reading and listening to for a few years. … [he] proceeded to tell me how concerned he was about something squirrelly you had written.

Funnny! A comparable occasion arose in early December when I ventured out on a cross-county trip to a training seminar conducted by my Arichbishop (he does two of these a year for all his priests).

I sat next to a postulant - at that moment a Reformed Baptist pastor who was seriously considering a move of his pastoral credentials to our Anglican jurisdiction. The Archbishop had invited him to attend to get to know other Anglican clergy and to observe how these men related to one another in an Anglican pastoral context. We got to chatting and comparing how we had moved from where we’d been (ecclesiastically) to orthodox Anglican ministry. We had much in common as to background, so the note comparing was cordial and expansive between lecture sessions.

Two days later, he sat down before the morning lecture, and began with an apology. “I’m sorry I didn’t figure out who you are,” was the jist of it.

I’m sure my face communicated something of surprise and puzzlement, perhaps even dismay. Just who did he think I am! I mumbled something like that - “Who am I?” a bit worried that I sounded like an old doddering idiot who’d temporarily misplaced his identity along with his keys, phone, and eyeglasses.

It seems he’d listened to an interview that Warhorn’s podcast “Out of Our Minds” did with myself, Pr. Tim Bayly, and Jake Mentzel. Afterwards, he’d remembered Pr. Tim’s name, but had forgotten mine.

In this case, however, he did not find Warhorn’s efforts to contain squirrely stuff. Like me, he rejoiced at what he found through this Christian media project. And, for me, the remainder of that seminar was a pleasant time to bask in the golden light shed by Warhorn and Pr. Bayly.

Oh my. YOU basking in our light? What a joke, dear brother. We bask in yours! Truly. Love,

Fr Bill, it has been my joy for the last two weeks to listen to Pr. Tyson Turner teach inmates in the jail I chaplain a condensed version of some of your material on sexuality. Looking forward to hear him finish up this material this week.

Thank you for this report, @josiah.alldredge! For over 30 years now, we’ve usually gone out sowing seed in the hope that we’ll eventually be like those folks in Psalm 126:6.

In this case, Pr. Turner is one of a group of men scattered around the country who are evaluating an updated and expanded Five Aspects of Man. I’m be especially interested in his insights and feedback from deploying concepts in that revision as he’s deploying those ideas in that context.

Gen 8:21: “The LORD smelled the soothing aroma; and the LORD said [fn]to Himself, ‘I will never again curse the ground on account of man.’” [Lit said “to His heart”] Seriously? We must remove “said to His heart,” replacing it with “said to Himself?” #Biblestraightup

Yes, all translation is interpretation. Nothing is simple, and yet… 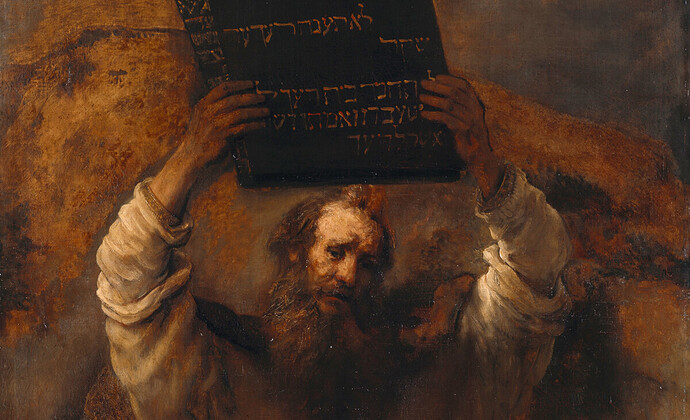 All Scripture is God-breathed (1) - Warhorn Media

(First in a series.) It is a foundational doctrine of the Church all Christians have confessed with one voice down through history that the Bible is infallible. We believe and confess that when the Apostle Paul declares in 1Timothy 3:16 “all...